White began the Rams’ postseason success in 2007, as the team made a 15-win improvement over the previous season and posted a fourth-place finish at the National Christian College Athletic Association World Series. The Rams claimed their spot in the national tournament after winning the NCCAA Mid-East Regional title, which earned White the honor of NCCAA Mid-East Region Coach of the Year.

The Rams appeared in the World Series once again in 2008 and finished the year with a 33-19 mark to set a new school record for wins.

2009 proved to be a milestone year for both White and the program. White achieved his 100th career win on April 29 against Bryan College, while the Rams once again made it to the NCCAA World Series. The team went 5-0 in the tournament, claiming Bluefield College’s first-ever national championship. White was named the NCCAA Coach of the Year after leading the Rams to the title.

The Rams returned to the World Series once again in 2010, and advanced to the championship round. However, Bluefield settled for a second place finish, falling to North Greenville, 7-6 in 10 innings. The Rams also fell just short in the Appalachian Athletic Conference championship, dropping the title game to Tennessee Wesleyan. However, the Rams concluded the 2010 season with a 41-16 mark, setting the current school record for wins.

In 2013, the Rams transitioned to the competitive Mid-South Conference. Early in the season, White was named as the MSC's NAIA Coach of Character.

After a down year in 2013, White rejuvenated the Rams in 2014 as they finished the year with a 35-19 record. BC went posted an eight-win improvement in MSC play, qualifying and recording a win in the conference tournament. The Rams then received an at-large bid to the NCCAA World Series, narrowly missing out on semifinal action after going 2-2 in pool play.

Three student-athletes were named All Mid-South Conference in 2014, while six were slated to the NCCAA All Mid-East Region first team, including Zac Russell-Myers as the Mid-East Region Offensive Player of the Year. Following the World Series, Russell-Myers (1st team) and Tyler Timmer (2nd team) were both named as NCCAA All-Americans.

In the Rams' return to the AAC, the squad finished the season at 24-24, but missed out on qualifying for the AAC Tournament. However, BC finished as runners-up in the NCCAA Mid-East Regional and earned its seventh trip to the NCCAA World Series under the direction of White.

Before taking the helm of the Bluefield program, White served five years as an assistant coach and recruiting coordinator at his alma mater, UVa.-Wise. White holds multiple offensive records for the Cavaliers, and was inducted into the UVa.-Wise Hall of Fame in 2001 for his athletic success. He was a three-time All-Conference selection, two-time All-Region selection and an All-American while at Wise.

In addition to his baseball duties, White serves as BC’s Assistant Athletic Director, assisting with a variety of administrative roles.

White, a native of Castlewood, Virginia, is married to the former Michele Addison. They have two children-Dalton (18) and Connor (10). 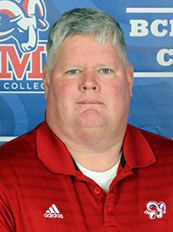