Dr. John-Scott Moir [basso] began his profesional career as a chorister with the San Diego Opera. John-Scott worked alongside great artists such George London, Joan Sutherland, Sherrill Milnes, Richard Leech, Aprile Millo, and Beverly Sills; conductors such as Richard Bonynge, Eduardo Müller, and Theo Alcantara. His PBS-TV debut (in the SDO’s stunning production of ‘The Merry Widow,” with Sills and Alan Titus) decided his future career goals for him. In his fifteen seasons with the company, John proceeded to advance to comprimario parts, solo outreach, and (much to his surprise) as a featured dancer in the SDO’s Russian Arts Festival production of Boris Godunov!

A founding member of the San Diego Gilbert and Sullivan Company (SDG&S, later S.D. Comic Opera) John worked under three former D’Oyly Carte veterans, who praised his ‘impeccable diction and powerful voice,’ – (Kenneth Sandford) as much as the critics praised his acting: “Easily the member of the cast with the greatest comic flair was John-Scott Moir as Poo-Bah” (San Diego Union). John-Scott also performed in musicals and operettas with the San Diego Civic Light Opera (Starlight), working under some of Hollywood’s Golden Age musical personnel, including MGM studio conductor, Johnny Green.

Dr. Moir has recorded for Pro Arte and Delos. His students have performed with the MN. Chorale, MN. Opera, Dale Warland Singers, been on the faculties of a number of Collegiate institutions, have toured in Hal Prince productions, been in National Tours of Broadway Musicals, adjudicated for International Singing Competitions, and performed on some of the most prestigious operatic stages in the world, including the Met.

As a Choral conductor, Dr. Moir came to direction with the express desire to be a conductor with first-hand knowledge of the human voice. When studying under choral directors such as Frank Almond, (SDSU) Zoltan Rosenyai, (USIU) Don Neuen (Eastman, USC) and Deen Entsminger (Belmont) Dr. Moir consistently sought to approach his conception of choral sound with a decidedly ‘free voice’ model in mind. Dr. Moir was Director of Choirs at Southwest Christian High School in Chaska, MN and taught at Crown College as well as the University of Minnesota- Duluth. As Founding Artistic Director for a decade with the Twin Cities semi-professional chorus, ‘CORO!’ –comprised of the best solo singers and voice teachers in the Twin Cities area, Dr. Moir’s chorus presented varied series of programs each season- joining with other ensembles: (‘Die Zauberflöte,’ ‘I Puritani’ with Minnesota Concert Opera, in addition to their own programs: “Wagner and the German Romantics,” “A Slavic Tapestry,” numerous Christmas programs, a “French Opera Gala,” culminating in a series of “Viva Verdi” concerts during the Verdi Bicentennial year.

Since coming to Bluefield College, Dr. Moir has brought Timothy Sharp, Executive Director of the ACDA, to direct the choirs; and in 2019, Dr. Moir took the Bluefield College Choirs on their first European tour in more than a decade to Salzburg, Vienna, Eisenstadt, and Budapest. In 2022, the choirs hope to go to Europe on tour again, this time to Ireland, Scotland, and Wales. 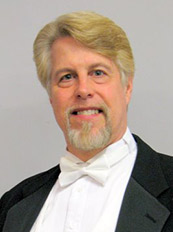